PUBG, or PlayerUnknown’s Battlegrounds, is a battle royale game that revolutionized gaming when it was initially released and still holds a massive player base. After the success of the PC version of the game, the developers took things a step further and released a mobile edition of the game, available on both Android and IOS. It gained even more fame because the freedom to shoot a few other players while on the toilet is just too tempting to pass up.

There’s no bigger high than seeing your name appear on the screen as the last standing player, but, often you’ll choose a name and regret that choice a few months later. Luckily, we’re here to show you exactly how to change your in-game name in four quick steps.

The first thing you’ll need to do is boot up your game and tap on the Missions button.

Then go to Progress Missions and scroll back to the Level 3 mission, which will give you the precious Rename Card. You’ll need to add someone to your friends list to complete this mission and receive your card. If you’ve already done this, then tap on Collect.

Now go back to the main screen and tap on Inventory and then Chest. Scroll down until you see your Rename Card and select it and then tap Use.

Type your new name into the box that pops up and tap on Ok. Also, take note of the fact that you can only change your name once per day, and you will always need a Rename Card to do this. 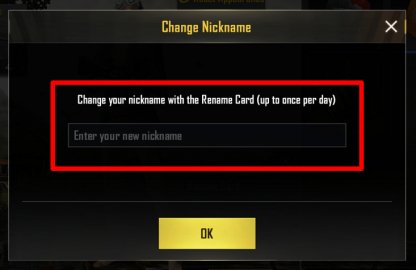 A rose by any other name…

We’ve all been in the situation when you’re looking at your name on the screen, and it just doesn’t fit anymore. Now, with this quick and easy guide, you can ensure that the right person is being awarded that coveted chicken dinner.

If you liked this article then you'll love our newsletter!

Join us to receive hilarious memes, photo galleries, tips&tricks, and the best games!

The best new additions in the PUBG Mobile 2.0 update